* In case of any delay in receiving the OTP, you may verify it later. Please proceed without verification.

Your mobile number is not registered with us. Please register your mobile no.

Srimushnam, a modest Panchayat town situated in the territorial dominion of Cuddalore is an important pilgrimage center for Hindus. The small town is the home of the illustrious Sri Bhoovaraghaswamy Temple (often spelled as Sri Bhuvaragaswami Temple). Srimushnam is located 36.1 km away from the urban center of Chidambaram; Srimushnam is an integral division of Kattumannarkoil of Cuddalore district.

Contrary to typical moolavar deities (Perumal deities) across the Vishnu temples, the presiding deity in Srimushnam temple is in the form of a minuscule idol standing as the Varaha Avataaram. The avatar of Vishnu in the form of a boar and is looked at as the third in the Dashavatara (the ten principal avatars of Vishnu). A must visit temple for Lord Vishnu deities, Sri Bhoovaraghaswamy Temple in Cuddalore temple in Cuddalore is believed to help attain Mukti (Moksha) in this lifetime, such is the divine power of Bhoovaraghaswamy.

The historic Srimushnum Sri Bhoovaraghaswamy Temple is regarded as one of the eight Swayam Vyakta Kshetras or Swayambu Kshetrams (self-manifested shrines) in the country. 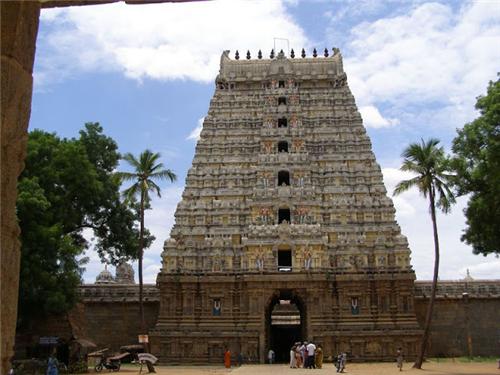 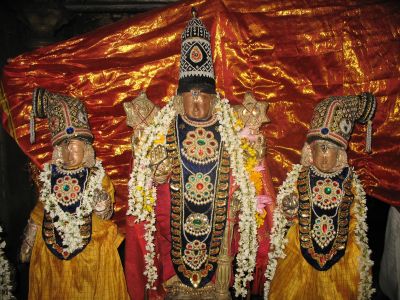 Sri Bhoovaraghaswamy deity in Srimushnam temple is a Saligrama Moorthy and the distinctiveness of this perumal koil is that Thiru manjanam / Abhishekham - holy bath with aromatic ingredients is done day-after-day to the Lord.

Hiranyaksha, the son of Diti and Kashyap and an younger brother of Hiranyakashipu, desired to be a paramount power. 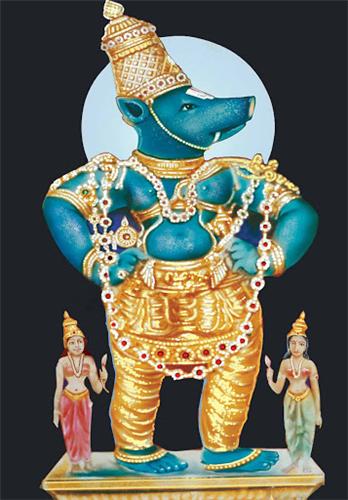 To accomplish his desire, the Asura rolled over Mother Earth and got hold of it into the underworld, from where he predominated. Bhuma-Devi (consort of Varaha Perumal) took on penance looking for help from Lord Vishnu to protect her from the mighty Hiranyaksha. Lord Narayana adopted the form of Varaha (wild boar), moved into the Pataal loka and defeated the demon Hiranyaksha. 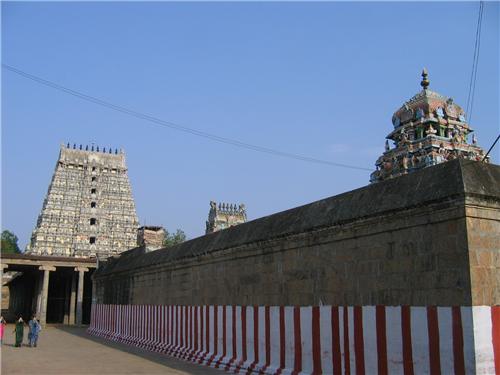 The battle between the demon Hiranyaksha and Varaha Peruma lasted a thousand years! Finally, Lord Vishnu brought around Mother Earth on his Adisesha (the king of all serpent deities) and came along here as a Swayambu deity. Legend has it that he made the Pushkarani with the sweating, which emanated from his body after his fight with the demon Hiranyaksha. 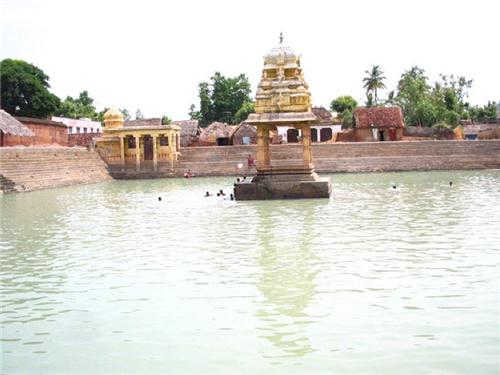 As his final wish, Hiranyaksha Asura implored to Lord Vishnu to turn his head in a particular direction. Therefore Sri Bhoovaraghaswamy's head is figured turned in the direction of the Hiranyaksha to the South. A unique characteristic of the moolavar (presiding deity) in this temple is that the face, in the form of a wild boar, is turned to the South, while the body assuming the shape of a human is facing the western direction. 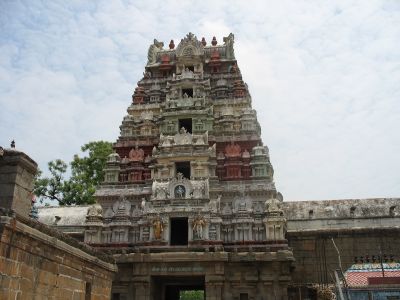 The Goddess was concerned that devotees might avert this temple because of the pig face of Lord Vishnu. Thus, she attempted penance and requested Lord Vishnu to exhibit his good-looking form. As a response to the appeal, the Utsava Murthy (alternative of the presiding deity in a much smaller form) in this temple boasts as a Yagya Varahaswamy with Sangu Chakram (conch and chakra). 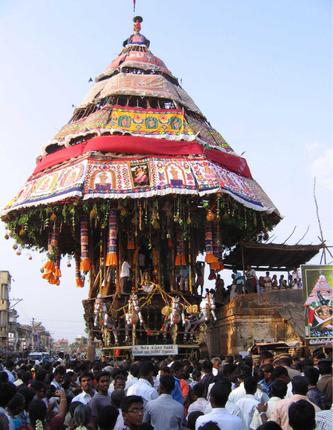 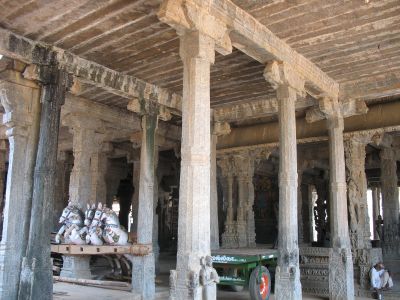 The Mustabhi Chooranam is a delicate mix of Korai Kizhangu (Cyperus rotundus), Sugar, Cow Ghee, Elachi, Pachai Karpooram and Mango. The special prasadham given here is believed to heal all sorts of diseases of the devotees.

By Bus: Several direct buses are operated from Chennai to Srimushnam
By Train: Any southbound train from Chennai, get down at Virudhachalam Junction railway station (station code: VRI) and take a bus to Srimushnam via Rajendrapatnam
By Car (best route from Chennai): Tindivanam-Vikravandi-Panruti-Neyveli-Vadalur-Sethiya Thope (Travel time of 4 hours)