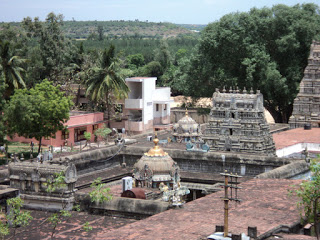 this temple has Dravidian style of architecture. It is said that one of the disciples of Lord Vishnu, named Sri Ramanuja, who was a great philosopher, lived in this temple.

Devanatha Swamy Temple is located in the edge of the Gandilam River in Thiruvanthipuram which is considered as holy as River Ganga. It is said that the river water looks red like blood during monsoon due to the curse of a rishi (saint). It is more than 1000 years old temple in Cuddalore. This place was developed by Adisesha. It is the place where Lord Brahma, Lord Shiva, Lord Indra, Mother Bhoomadevi, Sages Bhragu and Markandeya performed penance. The deities presiding this temple are Lord Vishnu who is considered as “Lord Devanatha” as he is the God of all Gods, and the Goddess Lakshmi who is considered as “Sengamala Thayar” (Hemabujavalli) are worshipped in this temple. Lord Devanatha is also known as Dasa Satyar, Deivanayagan Achuta and Mevoojothi. This temple has equal importance to Tirupathi temple as Lord Devanatha is considered as twin of Lord Venkateshwara of Tirupathi. In the temple the deity gives darshan in the standing position like Lord Devanatha, in the sitting position like Lord Ahindrapuranatha, and in the lying position like Lord Palli Kondanathar. There are separate shrines of Lord Rama, Sri Rajagopalan, Sri Venugopalan, Alwars and Desika in this temple. This temple is famous for 10 days Chithirai Devanatha Perumal Brahamotsavam festival. You can witness the huge crowd of pilgrims who come from far off places to serve their deity. There are some more festivals which are celebrated at the temple all around the year.


How to Reach the Temple

Thiruvanthipuram is located about 7 km away from the town of Cuddalore and it is about 15 minutes journey to the temple from the town.

By Road: You can easily travel to the Devanatha Swamy Temple by road as it is only 7 km away from Cuddalore. There are frequent private and state buses available to Cuddalore from nearby cities and it makes your journey easy and convenient. Most of the buses pass through Thiruvanthipuram. You can also travel by cars and taxis to Cuddalore.


Best Time to Visit the Temple

Devantha Swamy Temple is the famous pilgrim spot in South India located in Thiruvahindipuram, where huge crowd of pilgrims can be spotted any time. Thus, there is no specific time to visit the temple. But still if you are looking for right time then, you should visit the temple during the month of May- June when there is grand celebration of Brahamotsavam festival at the temple.