Cuddalore is a beautiful place located on the eastern part of the state of Tamil Nadu. Pre-independence, the town was considered as the sea port and a trade centre for the British Empire. Post- independence it started developing and now it is one the fastest developing cities of Tamil Nadu. Earlier, only fishing was the only occupation of the people in the town. But now, this town is well settled in the industrial sector. Cuddalore is the house of fishing industries, port related industries, chemical, pharmacological and energy industries. Cuddalore covers the geographical area of 27.69 sq km. The town is under Cuddalore Municipality for all the administration and development of the town.
District Collector
Email: collrcud[at]nic[dot]in
Address: Collectorate Cuddalore-607001
Phone:04142-230999
Fax:04142-230555
https://cuddalore.nic.in/
Superintendent of Police, Cuddalore
Address: SP Office, Manjakkuppam, Cuddalore, Cuddalore District, Tamil Nadu. Pincode : 607 001
Email: sbofficecud[at]gmail[dot]com
Phone: 04142284330 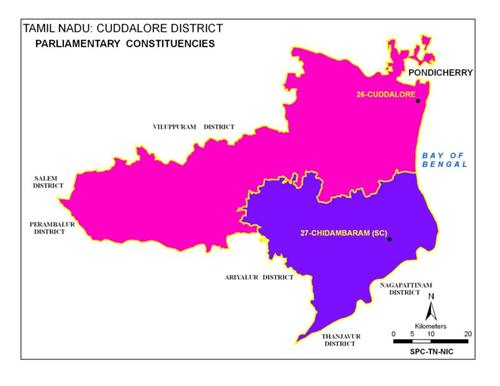 The municipality of Cuddalore was established in the year 1866 during the British control over the country. The town was considered as a revenue village by British. Post- independence, the town started growing and it was promoted to selection- grade municipality in 1991 and special grade in 2008 due to the development of the town. The municipality of Cuddalore has 45 wards and each ward has its elected counsellor. The municipality performs various functions for the development of six major departments and all these departments are under the control of Municipal Commissioner. For details of administrative staff in Cuddalore, click here
CUDDALORE MUNICIPALITY
Commissioner
7397382198

Six departments of Cuddalore Municipality are:

Duties and Responsibilities of Municipal Corporation of Cuddalore are:

Cuddalore is part of Cuddalore Assembly Constituency. It elects a member for Tamil Nadu Legislative Assembly once in every five years. Dravid Munnetra Kazhagam (DMK) has won the assembly seats five times, Indian National Congress Party and ADMK has won two times and now ADMK is the ruling party there. Since 2009, Cuddalore is a part of Lok Sabha Constituency. The current Member of Parliament is from the Indian National Congress party. The motive of MP and MLA in Cuddalore is the welfare of the people in the town and they are working for the growth and development of the town.

Law and Order in Cuddalore

The maintenance of law and order in the town of Cuddalore is upheld by the Cuddalore sub division of the Tamil Nadu Police. The head of the sub division is Deputy Superintendent (DSP) of the town. There are four police stations in Cuddalore town which are located in Cuddalore New Town, Cuddalore Old Town, Cuddalore Port and Thirupapuliyur.  There are few special units for the maintenance of law and order in the town and which operate at district level police division such as district crime, social justice, prohibition enforcement, human rights etc. The district level police division is headed by the Superintendent of Police (SP). Law and Order units in the town have to work 24x7 for the safety of the town.